Cheyenne, WY (November 30, 2016) — In time for the holiday season, Cow Eye Press, the independent publisher of idiosyncratic fiction, is set to release Beyond the Blurb: On Critics and Criticism, a thoughtful collection of essays by critic Daniel Green. According to editor and company founder Natalie Zeldner, the book, which will come out on December 1, is the first work of non-fiction to be issued by the small press.

"We began our imprint in 2014 naively expecting that the reading public would reward our commitment to fine literature by showering us with adulation and sales. Eccentric fiction, we thought, would bring glory and make us a ton of money. Unfortunately, that has not been the case."

Zeldner says that after conducting extensive market research, she and her partners decided that the surest way to achieve financial security for themselves and their offspring would be to produce a book of literary criticism articulating an alternative approach to literature that rewards innovative and unconventional fiction.

"It was a purely commercial decision," she explains. "We're just responding to the market."

Intended for both an academic and general readership, Beyond the Blurb identifies the most important principles of literary criticism and considers the relevance of those principles in the work of specific literary critics, including Harold Bloom, Susan Sontag, and William Gass. It also examines the failed criticism of such prominent critics as James Wood and Christopher Hitchens.

A longtime literary critic and blogger at The Reading Experience, the book's author was clearly motivated by an impulse to stake a claim for the more profound purposes of literary criticism, something that goes beyond informing readers whether they might want to purchase this or that book. "I value a kind of criticism that is capable of illuminating the sort of literary work I most admire," Daniel Green writes in his introduction to the book, "one that provokes, surprises, takes risks, but also satisfies aesthetically, in effect enlarging our perception of what can be considered aesthetic 'success.'"

The publisher expects that, in addition to appealing to inquisitive readers and critics, the collection will have special relevance for literature courses and creative writing programs.

"It's a compact collection that really gets to the essence of what literary criticism, at its very best, can and should be. It is not only helpful for critics but also should be reaffirming for writers who create with an attention to (and joy for) language."

Zeldner says that Beyond the Blurb will have an initial print run of 15,000 copies but that until a proper distributor can be found, these copies will be stored in the small room of her house where her late mother lived for many years. "Mom really loved literary criticism, and she especially valued books that offer a contrarian perspective, so I know she would have approved."

In the meantime, Zeldner continues to have faith in the viability of literature and literary criticism even in the face of an oppressive publishing environment ruled by large publishers and their sheep-friends in the media.

"My partners and I have invested our entire life savings into this project, not to mention the bulk of our children's college funds. It's all or nothing at this point, so I sure hope people buy the book!"

ABOUT COW EYE PRESS: Cow Eye Press is a publishing house specializing in literary fiction with an intercultural focus. Its readers enjoy works that challenge the mind and enrich the soul by exploring the boundaries of culture and society. For more information, visit the Cow Eye Press website at www.coweyepress.com.

ABOUT DANIEL GREEN: Daniel Green is a literary critic whose essays and reviews have appeared in numerous publications both online and in print. He maintains the literary weblog, The Reading Experience, which he created in 2004.. 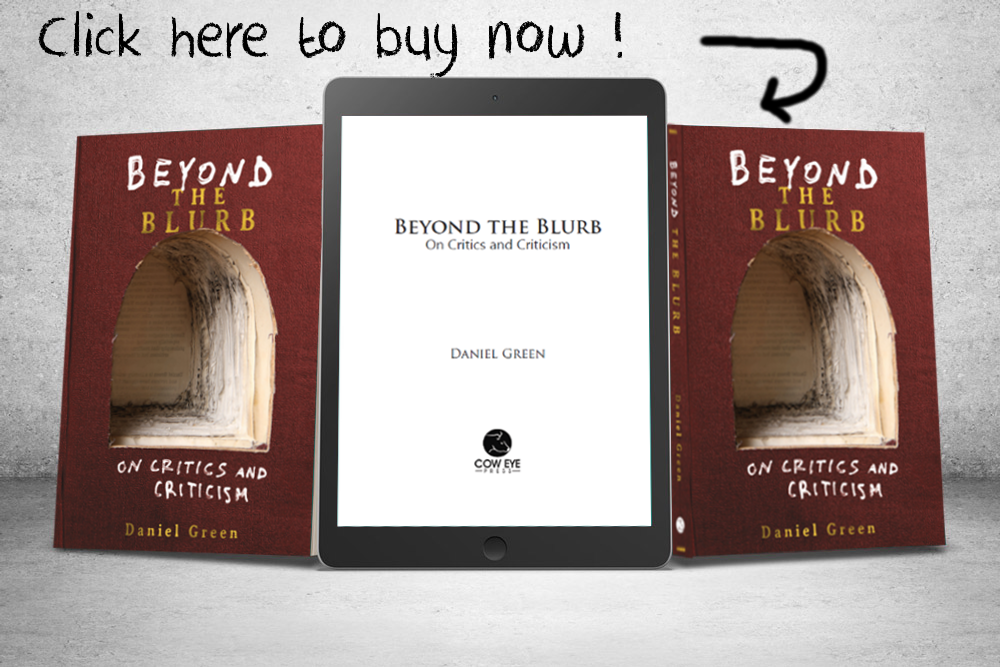