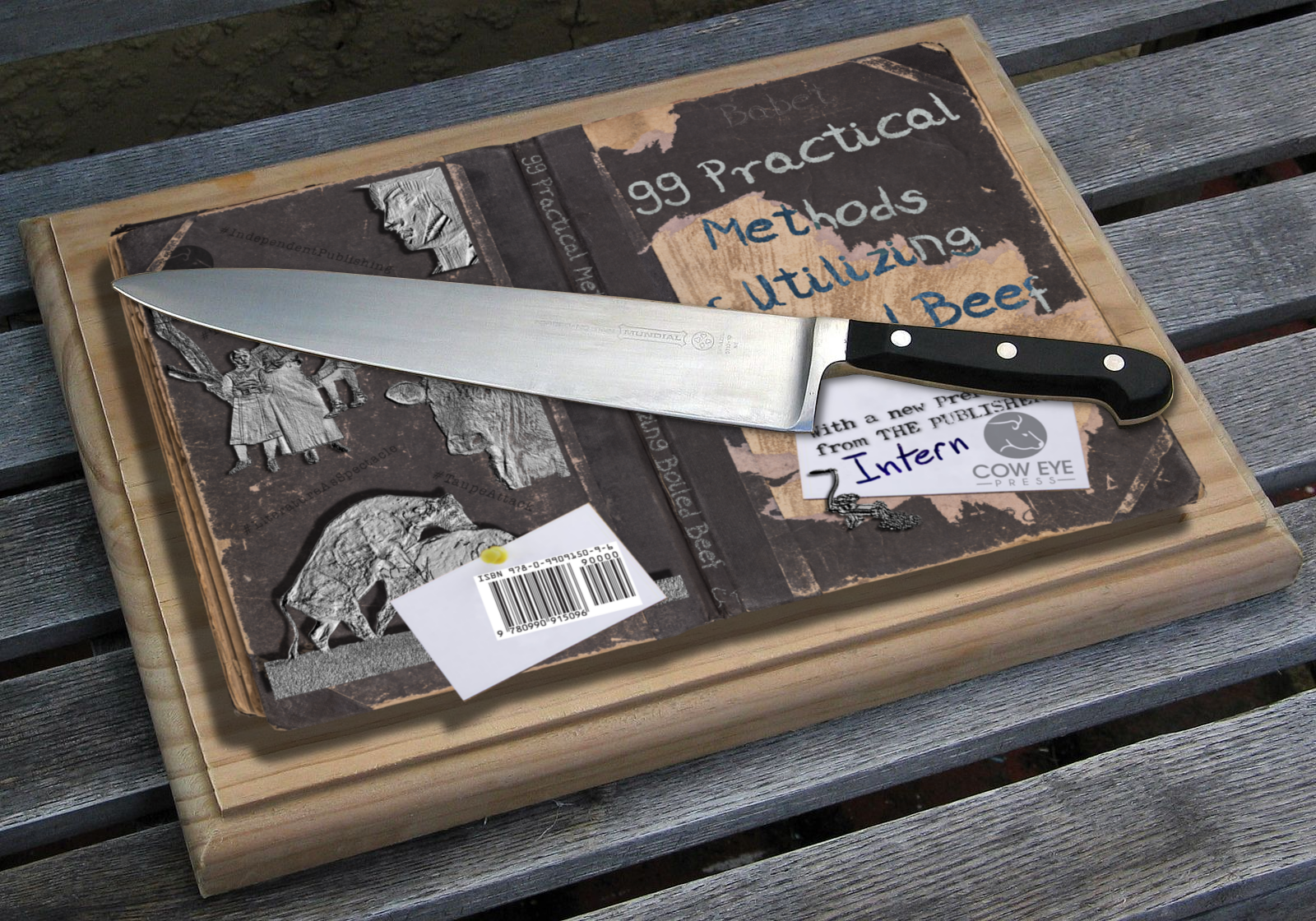 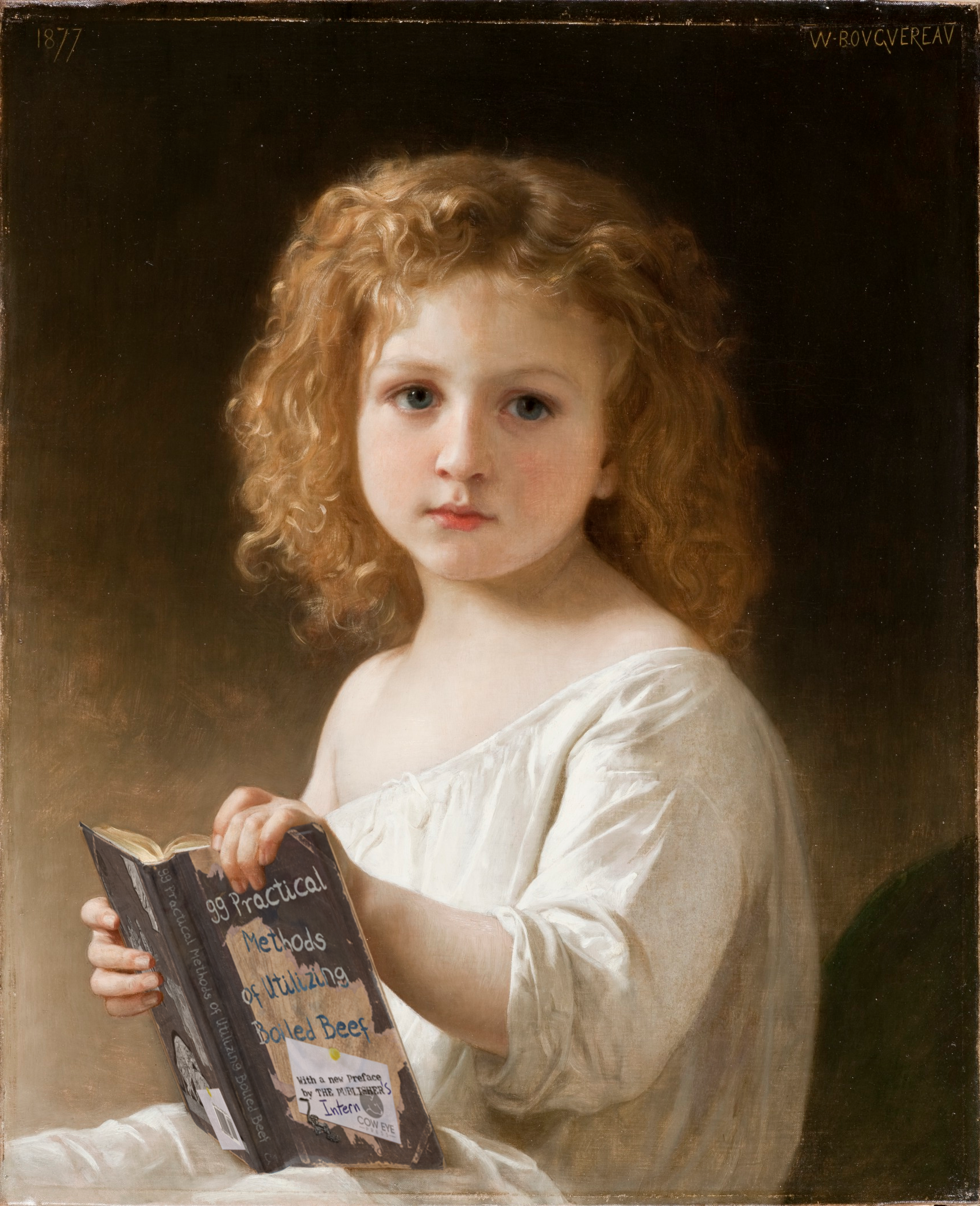 Cheyenne, WY (February 19, 2019) — Cow Eye Press has acknowledged that its latest work of fiction, 99 Practical Methods of Utilizing Boiled Beef: with a new Preface from the Publisher, due to be released on March 1, has been compromised.

According to CEP editor and publisher Natalie Zeldner, a former intern introduced unauthorized changes into the text as an apparent retaliation against the small press.

"We're in shock right now," said Zeldner. "We didn't realize until we got the books back from the printer that the changes had been made. They were subtle and must have been inserted when the files were transferred, so we didn't see them in time. And now it's too late."

Zeldner says the tampering includes slight alterations sprinkled throughout the text, including unflattering personal references to Zeldner herself. The cover also has been "defaced" with a handwritten inscription that makes it unclear what the official title of the work is.

"It's sad, because you go out of your way to give a young person a chance. You pluck them out of obscurity and present them with an opportunity to learn about the publishing world, how it works, its intricacies. And this is how they repay you? As someone who has worked in independent publishing for quite some time, I thought my faith in humanity couldn't go any lower. And then something like this happens."

Zeldner said the reasons for the apparent sabotage were unclear, but that they might stem from a misunderstanding regarding compensation for the intern's labor.

"Although we were very clear that our internship program would be unpaid, certain revisions suggest that the intern misunderstood this and assumed payment was forthcoming. Which is just ridiculous. I mean, when has an independent publisher ever had enough money to actually pay somebody?"

As to its plans now that the issue has come to light, Zeldner says it's too late to rescind the printing and that the 12,000 copies will make their way through the distribution channels.

"We thought of pulling the entire project. But what are we supposed to do with all these fucking hardcovers? Plus the importance and timeliness of the project means we have to move forward. The message is just too vital to get lost along the way. So, unfortunately, the books are being released as they are."

Zeldner says that despite this latest debacle, the Boiled Beef project may have some redeeming value if it helps to stimulate conversations about the difference between two- and three-dimensional fictions; the fluidity of genre; the many ways ambiguity serves the greater purpose of literature; the provenance of creative ideas and who "owns" them (author? translator? editor? intern?); the role that spectacle plays in the promotion and consideration of contemporary literary works; the obvious shortcomings of the current cookie-cutter approach to mainstream distribution and criticism that rewards conventional forms and penalizes those that fall outside easily articulated categories; and other issues within the literature industry that make this world so hostile to independent publishers and authors.

"Or something like that," said Zeldner. "Anyway, it's out of our hands at this point. So it is what it is. We'll just have to let posterity be the final judge."

ABOUT 99 PRACTICAL METHODS OF UTILIZING BOILED BEEF: Originally published in 1893 as a reference for the American housewife, 99 Practical Methods of Utilizing Boiled Beef has been revised, adapted, and reissued as a new work of fiction celebrating the principles of independent publishing. For more information, visit the book's home page.

ABOUT COW EYE PRESS: Cow Eye Press is a publishing house specializing in literary fiction with an intercultural focus. Its readers enjoy works that challenge the mind and enrich the soul by exploring the boundaries of culture and society. For more information, visit the Cow Eye Press website at www.coweyepress.com.